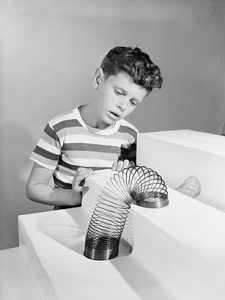 During World War Two, Richard James worked as a naval mechanical engineer at the William Cramp & Sons shipyards in Philadelphia. In 1943, he was working on a design for a special meter to monitor the horsepower output on naval battleships. One of the challenges he faced was to ensure that this sensitive instrument was supported and could be stabilised even in the roughest seas.
James was looking at how a variety of springs could be used to help when he accidentally knocked one of them off a shelf. He watched as the spring “stepped” in a series of arcs to a stack of books, to a tabletop, and then to the floor, where it re-coiled itself and stood upright. James felt a sense of slight disbelief but also had the inkling of an idea.
James’ wife, Betty, later recalled, “He came home and said, ‘I think if I got the right property of steel and the right tension, I could make it walk.'”
James started experimenting with different types of steel wire, and after about a year finally found a spring that he felt could “walk”.
Betty, who was dubious at first, changed her mind after this version was given to some neighbourhood children who loved their new toy. She decided it needed a name and after a few hours with her trusty dictionary came upon “Slinky”, meaning sinuous and graceful, which she felt described the sound and movement of the metal spring as it expanded and compressed.
The couple decided to take out a US$500 loan and formed James Industries (originally James Spring & Wire Company). They had 400 Slinky units made by a local machine shop, hand wrapping each in yellow paper, and pricing them at $1 apiece. Each was 2 ½ ” tall, and included 98 coils of high-grade blue-black Swedish steel.
Initially, toy stores were sceptical but, in November 1945, James was given permission to set up an inclined plane in the toy section of Gimbels department store in Philadelphia to demonstrate the toy.
Those first 400 units were sold within ninety minutes.
In 1946, Slinky was introduced at the American Toy Fair. Between then and 2005 over 300 million Slinkys have been sold, and the original Slinky is still a bestseller. 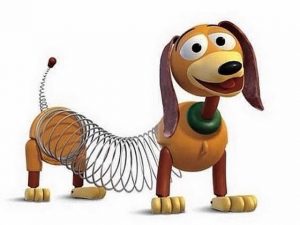 In 1952, the Slinky Dog debuted. Other Slinky toys introduced in the 1950s included the Slinky train Loco, the Slinky worm Suzie, and the Slinky Crazy Eyes, a pair of glasses that uses Slinkys over the eyeholes attached to plastic eyeballs. Of these, it is perhaps the Slinky Dog that is the most famous, having appeared in all The Toy Story movies.