With the UK election less than a fortnight away, my story this week is the tale behind two political icons albeit American ones.

THE DONKEY & THE ELEPHANT

Like so many things in politics, it started with an insult – “Jackass”

During the 1828 presidential campaign, Andrew Jackson’s opponents started labelling him as a jackass.

However rather than Jackson rising to the bait, he adopted the jackass morphing it slightly into a donkey which he started putting on his election posters. For the rest of his career the image stayed with him; cartoonists used it to either represent him as a stubborn ass or as someone struggling to control one.

The donkey represented not just a single Democrat but a faction called the “Copperhead Democrats”(the Northern Democrats that opposed the Civil War). The lion represented Edwin M. Stanton, Abraham Lincoln’s Secretary of War who had recently died. Nast thought the Copperheads were anti-Union and that the Democratic press’s treatment of Stanton was disrespectful.

In 1874, there was a possibility that Ulysses S. Grant would run for a third presidential term that the democratic press labelled as potentially akin to Caesarism (political authoritarianism). Nast, a life-long Republican thought this was a cheap scare tactic and so drew another cartoon for Harper’s, again using a donkey to represent the Democratic press and added two other animals.

The cartoon, titled “The Third Term Panic” used the donkey wearing a lion’s skin in order to frighten a group of animals. Among those animals are an elephant labelled “Republican Vote” which is awkwardly fleeing towards a pit labelled “Inflation” and “Chaos”. Among the other animals is a fox with a collar labelled “Democrats”. It is quietly backing away from the pit.

The Republicans lost control of the House of Representatives, and Nast bemoaned the defeat in another cartoon. It showed an elephant caught in a trap set by a donkey, and the lumbering confused behemoth of the Republican Party undone by the scare tactics.

Nast continued to use the elephant and the donkey in his cartoons, eventually having them represent the whole of his party and the opposition. The fox never really caught on.

By 1880, other cartoonists had picked up the symbols and spread them across the country.

Over a century later, their continued use in cartoons, party literature, campaign buttons and all sorts of political merchandise and propaganda has cemented the association between the parties and their animals.

The Republicans have even adopted the elephant as their official symbol, though the Democrats have so far shied away from doing the same for poor donkey.

Even 100 years on, it is hard to imagine the true scale of death and injury caused by World War One. During the heaviest periods of fighting soldiers were getting wounded in such large numbers that the medics often ran out of bandages.

To try help overcome this problem, Kimberly-Clark offered the army a new product of theirs – “Cellucotton” a highly absorbent fluffy paper wadding product that could be used for filters in gas masks, stuffing for emergency jackets but most importantly for pads and bandages.

Co-incidentally the technology for this had been found during a visit to Germany by two Kimberley-Clark executives Ernst Mahler and company president J.C. Kimberley.

Commendably Kimberly-Clark decided they’d sell Cellucotton to the War Department and Red Cross at no profit.

However it was not long after their arrival at the battlefields that a new and completely unexpected use was found for some of the bandages. The female nurses and the nuns tending the wounded started using them for their “Lady Days” (as periods were referred to then). The new bandages worked much better and were more hygienic than the pieces of rags which had been used previously

However when Armistice day arrived and the war was finally over, Kimberly-Clark found it had partially-filled orders for 750,000 pounds of Cellucotton and in another altruistic act Kimberly-Clark allowed these orders to be cancelled without penalty. It left the company with a huge surplus.  Worse still, the Army also had a large surplus of Cellucotton – and they began selling it to civilian hospitals at a ridiculously low price, instantaneously killing the market for Kimberley-Clark.

Kimberley-Clark had to try and find a new use for the product and fast.

The newly rechristened Cellunaps were positioned to retailers as the first disposable sanitary napkin. Retailers, though seeing the potential, were worried about public sensitivity and insisted they were not suitable to be placed on public display, and so must stay behind the druggists’ counter.

Sales did not go well. Women were not happy to ask the mostly male assistants for them at the counters.

Kimberley Clark decided on a new approach. They changed the name to KOTEX, a meaningless worger (word merger) of c[K]Otton-like TEXture that would hopefully not reveal anything in a crowded drugstore. The second and perhaps crucial change was the introduction of counter displays so that women could buy their Kotex without talking to the clerk. At the time this was not something that every retailer immediately agreed to, but as results were soon to show it solved the problem of a product people didn’t want to really talk about, and definitely didn’t want to ask a member of the opposite sex for.

As counter and shelf displays grew so did the sales and the brand.

Footnote : As Kotex sales began to grow, letters started to pour in to the company, mostly favourable but many were from women who wanted to know more about their bodies and the menstrual process. As a result Kimberly-Clark built its Education Division and began mailing out information packs, including a pamphlet called “Marjorie May’s 12th Birthday” which was initially banned in some states for being too sexually explicit.

Later they were to work with the Disney Company to create a movie called “The Story of Menstruation” which would be shown in schools and was seen by over 70 million schoolchildren – a most unlikely most-watched movie from the Disney catalogue. 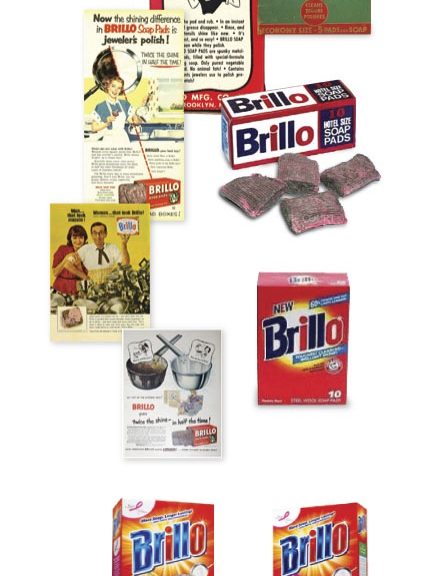 Don’t worry it is a clean story.

In fact, it’s a story about one of the world’s most famous cleaning brands. A brand that was turned into an icon by Andy Warhol.

The story starts in the early 1900s, when aluminium pots and pans were starting to replace the traditional heavy cast iron cookware in homes throughout America…but, there was a problem which was slowing the transition down. The coal-fired stoves of the day quickly blackened the aluminium pots making them both unattractive and difficult to clean. The new gas stoves of the time weren’t much better depositing soot onto the pans.

A New York door- to-door peddler named Brady found that this problem was limiting his sales of pans. He decided he needed to do something about it, and so started to experiment with different soaps and rolls of steel wool. He wasn’t satisfied with the results he got. The pans were clean but didn’t regain their shine.

Brady decided to consult his brother-in-law, a Mr. Ludwig, who was a costume jeweller and had different ways and products that he used to clean the different metals, glass and jewels of his particular trade. Drawing on this knowledge, Ludwig suggested what seemed obvious to him. Why not combine soap with jeweller’s rouge. Now jeweller’s rouge is finely ground ferric oxide and is regularly used as a polish for metals and optical glass, as it helps bring out the maximum lustre and can help create a mirror-like finish.

The resulting combination of steel wool and a bar of a mix of soap and jeweller’s rouge worked cleaning and restoring the desired shine.

Brady added the new product to his line of goods. Almost immediately, he found that it was out-selling his pans.

Brady and Ludwig wanted to move into commercial production and realized that they needed to patent their idea. They sought advice from an attorney named Milton Loeb. However, their funds were limited and so offered Loeb an interest in their fledgling business instead of his fee. Loeb obviously saw the potential and not only accepted the stake, he joined the company, going onto become treasurer and president.

It is Loeb who suggesting the “Brillo” name, under which the soap bar was duly patented and registered as a trademark in 1913. The partnership formed between the peddler, the jeweller and the attorney became known as the Brillo Manufacturing Company, with its headquarters and production operations in Brooklyn.

In the early 1930s the next and perhaps most dramatic step in the brand’s evolution happened, when the company developed a method to put the soap into the heart of the pads themselves creating something close to what we know today as the classic Brillo pad.

The new soap filled pads were a success and Brillo went on to become one of America’s most recognizable brands, but it was in the 1960s when Andy Warhol’s produced his oversize replicas of the bright, simple and bold packaging that Brillo became a true marketing icon. 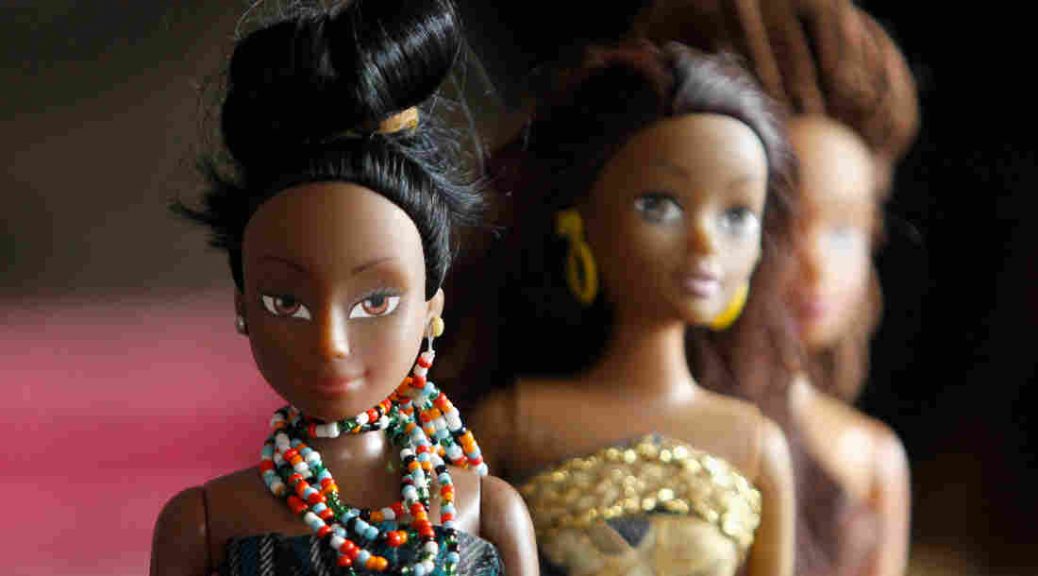 Taofick Okoya was shocked and saddened when his daughter told him that she wished she was white.

On reflection, he realised that perhaps this wasn’t so surprising. In Nigeria, as in many other countries, there is a huge amount of Western influence; an influence that impacts on all aspects of daily life. Furthermore, Okoya noticed that this influence wasn’t just affecting his daughter but seemed to be increasingly pervasive amongst many her friends and children across the country.

It was an insight that would change his future.

Having understood that this influence started to affect people from an early age, he decided he would launch a brand that would take on one of the West’s most famous, children’s cultural icons. He decided to launch a range of dolls, challenging the might of Mattel and challenging Barbie’s role as ‘queen’ of young girls’ hearts. Interviewed in Elle magazine he explained his thinking; ‘I don’t believe Mattel sees the Nigerian market as a priority, yet their product has great influence on the psyche of the children here and affirms certain values contrary to our society’

He reasoned that ‘[the western influence] might have been responsible for her (my daughter) wishing she was white. It made me aware that I needed to make her proud and happy being a black African girl, and not limit it to her alone as this was a common trend among the younger generation. The Queens of Africa became a platform to achieve this.’

So in 2007, Okoya, launched his Queens of Africa, a range of dolls that he felt Nigerian girls would better identify with as they reflected their skin colour and style. The dolls were modelled on three of the country’s biggest tribes come with traditional outfits and accessories. They cost around £4.50. Their aim is to promote strong feminine ideals, like love, peace and endurance.

The dolls are now, according to Reuters, selling up to 9,000 units a month – a staggering 15 per cent of the country’s toy market – and is so successful that it is outselling Barbie in Nigeria. The Queens of Africa programme now includes books, dolls, comics, music and an animation series.

However, thanks to a strong online presence, customers are also coming from as far afield as Europe, Brazil and America.

Even with this proof of the international potential, Okoya hasn’t yet been able to secure a deal to sell the dolls in mainline stories in America. They are only available in a few specialist stores, but ever willing to fight for what he believes in, Okoya is determined to win them over; ‘I am looking to prove them wrong’ he says.

His daughter wasn’t interviewed but I expect she’s pretty proud of her Dad and her heritage now.