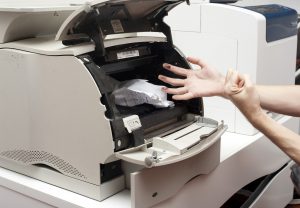 You’ve probably experienced it at least once in your life, or maybe once every month. You’re just dashing off to a meeting or preparing for that big presentation when the photocopier jams and the dreaded error sign appears.

How do you feel?

Well you’re not alone. According to an article in the Wall Street Journal, printers are among the most in-demand objects in “rage rooms,” where people pay to smash things with sledgehammers or indestructible baseball bats

Battle Sports in Toronto goes through fifteen printers a week. A new gaming centre in Birmingham, in the UK lets you smash up a desktop printer for just a tenner.

The paper jam however is one of the more recent first world problems. Gutenberg invented his printing press around 1440 but the modern paper jam didn’t arrive until around 1960.

Gutenberg’s printing press was considerably slower than its modern day counterparts but because printing was done one sheet at a time, jamming was impossible. In the first presses lowered inked type onto individual sheets of paper and even their successors which used a rotary drum were hand-fed.

In 1863, an inventor and newspaper editor named William Bullock created what became known not too surprisingly as the Bullock press. Rather than just a rotary drum it was fed by a single roll of paper. Some of those rolls were up to several miles long. The hugely increased speed of the printing made it a great success but unfortunately Bullock wasn’t to benefit from it for long. In 1867 one of his legs got caught in the press, which would have been bad enough but the wound became gangrenous, and he died

The next major step forward came in 1938 from the application of xerography which gives you a clue as which brand was leading this development.

In xerography, static electricity quickly and precisely manipulates electrostatically sensitive powdered ink, or what we know as toner. As the term “photocopier” suggests, a xerographic machine is less like a traditional printer and more like a darkroom.

Chester Carlson, was the physicist and co-founder of Xerox who invented their first xerography machines. To work these machines you placed your original under a glass pane, where light was reflected onto a statically charged photosensitive plate. The charged plate then drew toner from a tray and transferred the toned image to plain paper. Finally the toner was ‘melted’ into the paper in a miniature electric oven. Each copy took around three minutes to make. 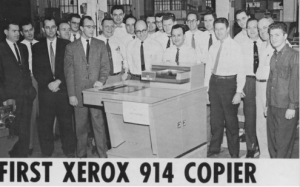 In 1959 Xerox had managed to automate the process and introduced the 914 which could deliver seven copies a minute. They also realised that there was a potential snag, as the new model had a ‘slightly’ concerning side-effect – the paper jam. A problem that wasn’t just frustrating but potentially dangerous. Jammed paper combined with the heating element sometimes set the paper alight.
No easy solution was found but that didn’t stop the launch, Xerox merely shipped the first models complete with free fire extinguisher. 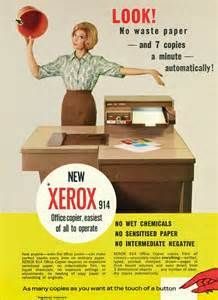 Despite this the Xerox 914 was a huge success, between 1960 and 1979, it delivered around forty billion dollars and one or two fires.