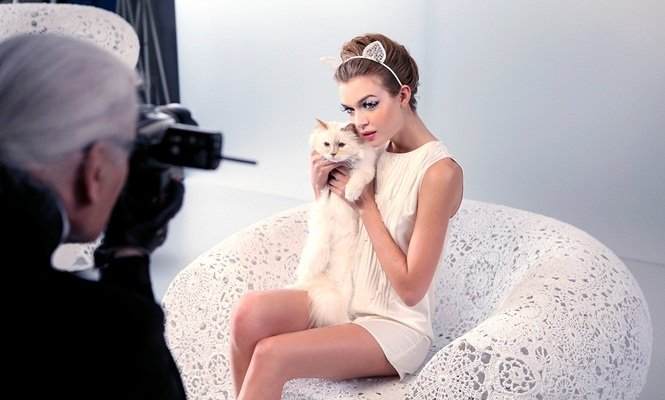 She is very particular about who she works with, “She doesn’t do foodstuffs, she is too sophisticated for that” says her manager. In fact she accepted only two assignments in 2014 – a collaboration with the cosmetics brand Shu Uemura and a photo shoot for a Vauxhall Corsa car calendar. They did however earn her a cool £2.2 million which is nearly as much Cara Delevingne got for all her assignments in the same year.

Choupette, for that’s her name, is small even by model standards but clearly needs constant pampering. She has two full time maids: Françoise and Marjorie. It is said, that of the two, she prefers Françoise.

Karl Lagerfeld has said of her, “She is the center of the world. If you saw her, you would understand. She is kind of Greta Garbo. There is something unforgettable about her, the way she moves, the way she plays. She’s an inspiration for elegance. For attitude.”

She moves with feline grace, probably because Choupette is feline.

She is a Birman cat and her smitten owner is of course none other than Karl Lagerfeld.

She is living proof that cats and celebrities sell and it seems like celebrity cats sell even better.

Footnote or should that be Pawnote: It had been rumoured that another feline internet sensation Grumpy Cat earnt $100 million dollars in commercial deals last year, but owner Tabatha Bundesen, told The Huffington Post this was “completely inaccurate”.