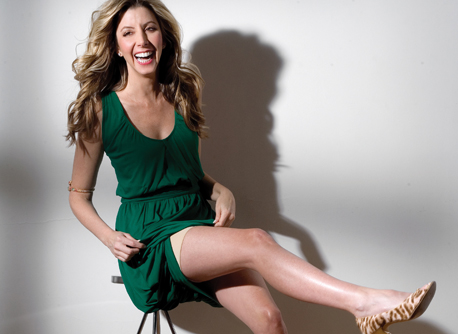 Sara Blakely believes she may be the only woman in the world that is actually grateful for cellulite and back fat.

That’s because Blakely is the woman who turned an idea and the $5,000 she had saved  from selling fax machines into a $250-million-a-year business.

And when asked where that idea came from she is delightfully candid. “My inspiration was my own butt”

Working in the hot Florida climate, Blakeley disliked the appearance of a seamed foot that you got with pantyhose especially when she wore open-toed shoes, but she liked the fact that the control-top eliminated panty lines and made her body, and her butt, appear firmer.

When cutting the bottom off normal pantyhose didn’t work, the cut off material on the legs rolled up too much, she started a search to find the right material. Eventually coming upon a solution in a craft store, she wrote her own patent following instructions from a Barnes & Noble textbook and incorporated her company under the name Spanx.

Not only candid, she is clearly committed to her cause. Once she had had her first samples made, she looked up companies in the Yellow Pages to find potential stockists. Having identified Neiman Marcus as exactly the sort of store she wanted to sell Spanx she set off to convince the buyer of the merits of her new pants.

Blakely believes in the power of a product demonstration and it wasn’t long before she was in the restroom showing off her ‘inspirational’ butt, demonstrating what it looked like before and after putting on Spanx.

It was a demonstration that got Spanx its first listing, in seven Neiman Marcus stores.

When Blakely told the manufacturer who made her samples about the Neiman Marcus deal, his response wasn’t quite the one she had been expecting. He clearly wasn’t  as convinced of the likely appeal of Spanx. Blakely recalls him saying: “I thought these were just going to be Christmas gifts for the next five years.”

Blakely however was determined that Spanx was going to be a success and she wasn’t going to leave anything to chance. She started to call up everyone she knew who lived near those first Neiman  Marcus stores and asked them to buy a pair of Spanx, promising that she’d reimburse their money.

“Right when I was running out of friends and money,” Blakely and Spanx got their lucky break… ” Oprah named them one of her favourite things,” she says.

That changed everything. distribution spread quickly to Bloomingdales, Saks and Bergdorf Goodman. In 2001, she signed a contract with QVC, the home shopping channel, where she sold 8,000 pairs in the first six minutes

Blakely is now the world’s youngest female self-made billionaire, according to Forbes Magazine. And you could say Blakely is the lady with the first billion dollar butt.

We, The Value Engineers, are currently planning a soft launch for the book in the USA so while the original volume does include lots of stories of American, and global brands, I thought a few new ones focused on brands with their origins in the US clearly wouldn’t go amiss and the Sara Blakely story is a classic of this  genre.