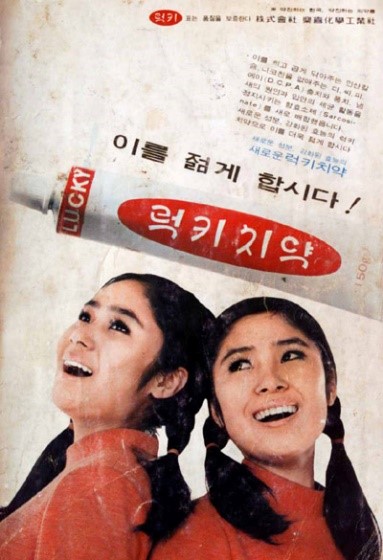 Following the success of the Korean edition of my book I have just been interviewed by Hyung Jun Yoon, a reporter from The Chosunilbo (The Chosen Daily) which is the largest newspaper in South Korea. Rather flattered, I realised to my embarrassment that I hadn’t written any stories about Korean brands so I thought it was time to change that …

From toothpaste to global electronics – Lucky by name but brave and bold in deed. The story of LG

“Nowadays, I find myself spending my evenings listening to the radio” mused Yoon Wook-Hyun.

It was spring, 1957 and Yoon Wook-Hyun, planning director of Lak-Hui Chemical Industrial Corporation, was attending a meeting of other managers, executives and company’s founder and president, Koo In-Hwoi. He made, what he thought, was just an innocent comment.

Lak-Hui Chemical Industrial Corporation had been founded in 1947. Pronounced Lucky it produced hygiene products such as soaps and laundry detergents and was most famous for its Lucky and Perioe toothpaste brands. In 1952, it had become the first Korean company to enter the plastics industry, but even this development didn’t stop Koo In-Hwoi’s response to Wook Hyun’s comment being a huge surprise to everyone in the room.

The late 1950s in was a period of dramatic technological change, with radios being seen as an embodiment of modern civilization, bringing news of the world to Korean listeners. However Korea was in still struggling to rebuild itself post the Korean War and the notion of a Korean company making radios seemed a long way off.

Politely Yoon Wook- Hyun voiced what most of the executives were thinking “I wouldn’t say it’s impossible, but our technology is too far behind.”

Koo In-Hwoi wasn’t to be dissuaded, he was sure that it was something they could and indeed should be doing.

“We could certainly deal with it. If we need to learn, we’ll go abroad and learn; if we can’t, we’ll invite foreign technical experts here. I say let’s unveil the electronic industry within Korea.”

Later that year, on October 1, Luk-Hai founded a new company, Goldstar, and work started in the new design laboratory on what was to become the A501 radio.

While importing radio components would have been more practical than risking in-house development, it was decided that GoldStar would develop its own components domestically. It was a bold decision, one that took a long-term view of the industry’s potential rather than looking to solve the immediate short-term challenge. It was a decision that helped lay the foundation for the company to become a major player in technology.

Goldstar was soon producing its own switches, transformers and sockets and on November 15, 1959, the first A-501 came off the assembly line.

Keen to build on this success and not scared of making brave choices, GoldStar started to develop its second radio. It decided to use the emerging new transistor technology and created the T-701. Unfortunately the new technology meant the price of the new radios was much higher and sales were terrible. Goldstar was teetering on the edge of disaster.

At which point the company had a stroke of luck, the “16th May” military government announced a plan to supply radios to rural and farming areas and gave a contract to Goldstar. Sales which were had been just a few thousand in in 1960, rose to over one million in 1961. In 1962, Goldstar started exporting some of its radios, gaining extra income and valuable foreign currency.

It was later merged with Lucky to form Lucky-Goldstar and in 1995, in a move designed to help it compete even more effectively in Western markets, it was renamed “LG”.