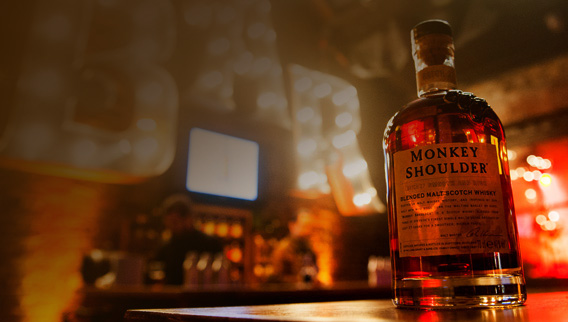 Monkey Shoulder is not your ordinary whisky.

Launched in 2005, it was the idea of the then malt master, David Stewart, who wanted to create the first ‘triple’ malt whisky. He combined three different Speyside Single Malts – Glenfiddich, Balvenie and Kininvie to delicious effect.

The name which, at first sounds extraordinary, has roots thath are actually a bit more ordinary.

Monkey shoulder is a slang term for a physical condition that afflicted a number of maltmen who used to work long shifts, turning the barley by hand using large wooden shovels. The long and arduous work had a tendency to cause their lead arm to hang down a bit like a monkey’s and people would refer to it as monkey shoulder.

William Grant who own and produce the brand are proud to say that their maltmen are among the few who still turn the barley manually but not surprisingly are equally quick to say that working conditions have changed and shifts are shorter and less ardous so monkey shoulder is no longer a problem.