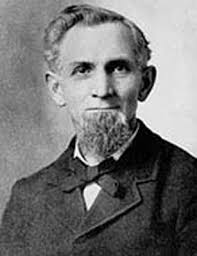 Store janitor, James Murray Spangler, invented the first upright vacuum cleaner in 1908. Spangler suffered from asthma and suspected that the carpet sweeper he used at work was triggering attacks. He decided he would have to do something about it. He mounted an electric fan motor on a Bissell carpet sweeper and added a soapbox and a broom handle to create a basic suction-sweeper.

He applied for, and obtained, a patent for the Electric Suction Sweeper. He then set about producing it. He and his son assembled the machines and his daughter assembled the dust bags but production was very slow with only 2-3 machines produced in a week.

Spangler gave one of the few machines completed to his cousin Susan Troxel Hoover who used it at home. She was really impressed and immediately told her husband and son about it. Her husband, William Henry “Boss” Hoover and her son Herbert William Hoover, Sr. were leather goods manufacturers in North Canton, Ohio at the time.

Seeing an opportunity, the Hoovers bought the patent from Spangler in 1908, founding the Electric Suction Sweeper Company. They retained Spangler as a production supervisor with his pay based on royalties in the new business.

Spangler continued to contribute to the company until his death in 1915 when the company name was changed to the Hoover Suction Sweeper Company.

Hoover went from strength to strength and established a major base in the United Kingdom.

For most of the early  and mid-20th century, Hoover dominated the electric vacuum cleaner industry in the UK, to the point where the “Hoover” brand name became synonymous with vacuum cleaners and vacuuming in the United Kingdom and Ireland. People did the “hoovering” no matter what brand of vacuum cleaner they were actually using.

However, at the end of the 1980s and early 1990s, things weren’t going quite as well, a backlog of vacuum cleaners and washing machines was building up in Hoover’s warehouse.

In 1992, Brian Webb, Hoover vice-president of marketing, and Michael Gilbey, director of marketing services, led a team tasked with coming up with a campaign to boost sales.

They created what they thought would be a wonderfully simple, highly effective promotion – anyone buying Hoover products for at least £100 could claim two free flights to Europe. They calculated that they could buy all the tickets they needed cheaply through charter operators.

The tagline in the ads read, “Two return seats: Unbelievable.”

Response to the promotion was sky-high, stores were soon fighting to keep Hoover vacuum cleaners in stock.

Hoover were elated at the sales figures and decided to expand the offer to include tickets to the United States.

As demand kept increasing, concerns started to emerge. People had caught on to just how good the offer was. Many were buying Hoover products that they didn’t want or need just to get plane tickets. Tickets to more exotic European locations generally cost more than £100 for a pair and a single ticket to the States were nearly always more than £100.

The travel operators retained by Hoover were unable to fulfil their contractual responsibilities in the light of enormous demand.

Despite a variety of “hurdles” that people had to overcome – receipts and application forms had to be sent off within 14 days; after that would-be travellers had to go through a lengthy procedure of nominating airports, dates and destinations, customers had to book accommodation and insurance through affiliated travel companies – Hoover couldn’t deliver on its promise.

As complaints mounted, the Hoover Holiday Pressure Group was established by Harry Cichy. They would fight on behalf of the flightless.

“To my astonishment, the Royal Mail van would turn up every day,” remembers Harry Cichy. “One bag to start with, then two bags, then three bags. We ended up with about 8000 members. One day a judge would phone up, next day a professor, the next minute it was a pig farmer from Gloucester.”

With the help of the pressure group, hundreds of customers began taking Hoover to court and soon Hoover found itself fighting legal battles up and down the country in the small claims courts.

The cases continued for six years after the promotion first started.

Looking back there were winners.

The airlines who supplied Hoover with thousands of extra seats – British Airways provided 20,000. Virgin supplied the same amount. A further 40,000 charter seats to Orlando, Florida had to be negotiated.

The VAT man was a winner too. It has been estimated that ‘he’ received an extra £4m, thanks to the unexpected sales.

The business cost to Hoover was enormous. The promotion had generated c£30m of sales but the cost of the tickets was £50m.

Brian Webb and Michael Gilbey were dismissed, along with William Foust, managing director of Hoover Limited and president of Hoover Europe.

The biggest loser however was the Hoover brand which was sold to competitor Candy for a knockdown price.