People sometimes ask where I get my stories from.

For this one  I went exploring but decided to start close to home. Three of my sons are in a band The Blue Highways (check them out https://thebluehighwaysband.com/  – I’m biased but think they’re not bad ). Jack the lead guitarist plays a Fender so I wondered if the was a story there…There was… 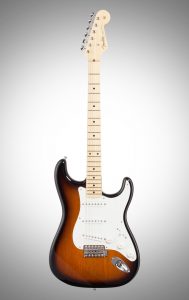 By the beginning of the 1950s the Fender Electric Instrument Company was just starting to make a name for itself. Leo Fender, a self-taught electrical ‘tinkerer’ and the man at the heart of the brand, had made the then bold decision to move from just repairing electric instruments to producing them.

Starting with a range of steel guitars and amps, Fender then introduced the Telecaster and Precision Bass guitars, all with moderate success.

It was in 1951 that Leo decided to focus his attention on creating a new electric guitar model that would succeed the Telecaster and be able to compete with the more upscale competitors already on the market.

His secret weapon turned out to be the fact that he was an outsider. Tom Wheeler, author of The Stratocaster Chronicles says, “Leo Fender wasn’t a serious musician, had little background (or interest) in the traditional crafts or lore of instrument building, and was even less interested in associating with the old-boy network of acquaintances who ran the major guitar companies.” 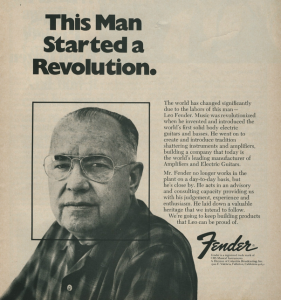 What this meant was that, while he listened to and indeed acted on users’ feedback, he wasn’t constrained in his thinking or his approach. He was happy to break the conventional rules of the market. It has been said that “he just wanted to build a better guitar”.

The new guitar however wasn’t just an updated Telecaster.

The now iconic body shape was down to a combination suggested by a new employee, Freddy Tavares and guitarist Rex Gallion. Gallion suggested that a solid-body guitar didn’t need squared-off edges since it didn’t have an internal sound chamber. This allowed Leo to start considering using rounded edges to get away from a body that was always digging into the guitarist’s ribs. Encouraged by this thinking it was Tavares who sketched out something that adapted the original balanced two-horned shape for the Precision Bass.

Around the same time, the new model acquired its name courtesy of sales chief Don Randall: the Stratocaster. Randall, who often referred to the “plain Jane” Telecaster, also insisted that the Stratocaster needed to be more elegant. This led to Fender’s first use of a sunburst finish which comprised two paint colours; Dark Salem, a brownish-black was the outer hue which graduated to Canary Yellow, the golden inner hue. This had another advantage, but it wasn’t one that Randall included in his sales pitch. The sunburst finish lessened the effect of mismatched wood grain in the ash bodies, which typically,but not always, consisted of two or more pieces glued together.

While looks and name were important, the sound was always going to be key. So, to better compete with more high-end instruments from other manufacturers,particularly the new Gibson which Les Paul introduced in 1952, Leo decided to give the Stratocaster not one, not two, but three pickups, with switching and controls that would create great tonal versatility.

But perhaps the Stratocaster’s greatest innovation was its bridge. The team wanted the new guitar to have a vibrato system that would offer solid tuning stability without compromising tone, sustain, player comfort and ease of use.

After many hours an initial design was created, Leo and some of his advisors thought the sound was good, others weren’t convinced. Leo ploughed on and started tooling up the factory. But when guitarist and adviseor Bill Carson came back from a gig and announced that it “sounded like an amplified banjo with no sustain” the original design was scrapped, and the launch was delayed.

Leo set to work again. It is said that Leo was finally inspired by a gram scale and completed an entirely new design in late 1953. In it the whole bridge assembly moved with the strings rather than having the strings move over rollers with the bridge remaining stationary. The strings were loaded in a new and revolutionary way and the tension of springs on the back of the guitar and the strings on the top held the whole system “floating” in balance and enabled shimmering vibrato, uncompromised tone and, crucially, stable intonation.

Fender claimed the design enabled a pitch span of up to three half steps but guitar players would in the next few years find ways of creating sounds never envisioned at Fender headquarters.

Given the timing of the launch, coinciding as it did with the emergence of rock ‘n’ roll, you might think the Stratocaster would have been an overnight sensation.

In fact, it got off to a rather slow start. Even three years after its introduction, it was still not particularly well known or well regarded.

One reason was that during the early years of rock’n’roll, its main lead instruments were saxophone and piano rather than guitar. Early rock ‘n’ roll musicians who did sling guitars most often played flat-top acoustics or big, hollow electrics by Gibson and Gretsch.

Leo and his team continued to have faith in their guitar and further improvements were made. 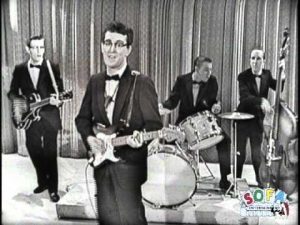 The fortunes of the Stratocaster and indeed the whole Fender brand changed on Sunday, Dec. 1, 1957 when a Texas rock ‘n’ roll trio called the Crickets appeared on The Ed Sullivan Show. They sang two songs, “That’ll Be the Day” and “Peggy Sue,” both penned by the group’s Stratocaster-wielding leader, a bespectacled 21-year-old singer/guitarist named Charles Hardin “Buddy” Holly.

Sales increased, and the brand was soon leaping up the charts.
Moral:
And the moral of this story is that sometimes it is better to bring a fresh perspective to an established industry.

Footnote: A post-World War II import trade ban on U.S. goods made getting a Fender instrument next to impossible for youthful British guitarists in the late 1950s. One of those disappointed guitarists was Brian Rankin. Like others he had seen Buddy Holly holding a Stratocaster on the cover of 1957 album “The Chirping Crickets” and desperately wanted one. Somehow his band leader managed to acquire him an early 1959 Fiesta Red Stratocaster with gold hardware and get it to London. Brian, or to give him his stage name, Hank Marvin, was extremely grateful to band leader, Cliff Richard. Together they became huge stars and Marvin became Britain’s first full-fledged guitar hero. 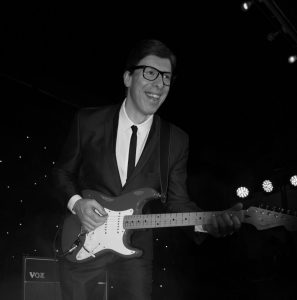