Once upon a time, there were two stores. 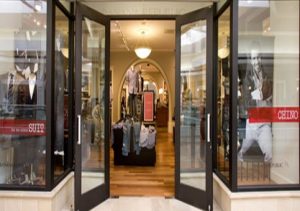 The first is sleek, chic and minimalist in design, with white walls and wooden parquet floors. It offers “modern, refined clothing and accessories for men and women…what you want to wear to work” The clothes are versatile, contemporary classics in styles that are both modern and (reasonably) timeless. Their aim is to “dress men and women who see every day as full of possibilities and seek to make the most of every moment and opportunity. We see life a little differently. We take it all in. We add to it. We make it our own and we live with style.” 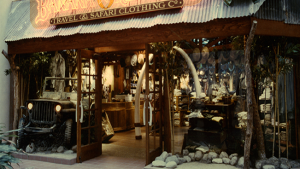 The second store is a little different. Life-size model giraffes and elephants stand amid old leather suitcases and wooden-crate racks piled with khaki “safari” clothing—Ghurkha shorts, pith helmets and chamois shirts with deep cargo pockets. A World War II Army Jeep balances on top some boulders in the front window and above the sales floor; an old bush plane hangs from the ceiling that has been painted to resemble a blue Zimbabwean sky. Safari and travel clothes include surplus military clothing customized with civilian touches like suede elbow patches, belts and wood buttons. 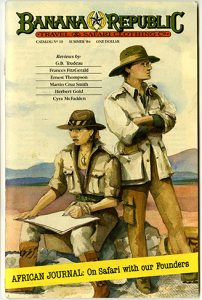 Laying around were distinctive catalogues. They contained no photos of the clothes, no models posing attractively; instead, they featured beautiful illustrations of the clothing, printed in soft duotone, alongside stories of far away places and the romance of travel.
The twist in the tale is that these two stores are in fact the same store, and if you haven’t guessed the brand, they are both Banana Republic.
The second store is in fact the original store. It was set up by Mel and Patricia Ziegler and opened its doors in 1978 in Mill Valley, California.
Mel and Patricia met when both worked at the San Francisco Chronicle (he as a photojournalist, she an illustrator). The couple both quit on the same day and went travelling, but it was Mel’s search for a replacement for his well-worn and well-loved military surplus jacket that was to lead to the creation of the store. Ziegler finally found a British Burma jacket in a Sydney “disposal” store, which his wife altered to downplay the garment’s military look and according to Banana Republic’s archives; “to play up its sensibility as a comfortable, utilitarian, everyday garment.”
Family and friends admired the jacket’s look and this prompted the Zieglers to set up what was to become the Banana Republic Travel and Safari Clothing Company. While many Americans thought “surplus” meant only camouflage U.S. Army T-shirts, they seemed to fall in love with the exotic military leftovers the Zieglers scrounged on their international buying trips.

“In England, we found Melton wool overcoats made for the British army selling for 25 bucks,” Ziegler recalls. Banana Republic marketed the clothing as rare and marked it up. It made good business sense “We weren’t losing money.”

By 1983, Banana Republic had five stores in California, a handful in other locations, and was bringing in $10 million a year. Don Fisher, who co-founded the Gap made them an offer. It was an offer to buy them out, fund expansion but leave them in creative control. It was an offer that was simply too good to refuse so they didn’t

For the next few years, things went well, riding on the back of films like Out of Africa, Romancing the Stone and the Indiana Jones series, the brand grew and grew. The Zieglers switched from selling adapted surplus clothing to using it as a template for manufacturing their own clothing.

However when the stock market crashed in 1987 and sales wobbled – the brand made a loss in 1988 – Fisher worried about the future of Gap and indeed whether the safari fad had run its course, brought in Mickey Drexler. Drexler, who would go on to help revive Gap, wasn’t a fan of pith helmets and wanted to take Banana Republic in a more mainstream direction. He and the Zieglers clashed, and Mel and Patricia left citing the classic “fundamental creative and cultural differences”.

Gap brought in a new management team and slowly at first and then with more momentum the brand shifted its focus away from khaki to one that included brighter-coloured casual wear and cruise line apparel. In 1989, the catalogue was discontinued. Stores were refurbished to reflect a more sophisticated, modern, urban style.
The early nineties saw a positive turn-around for Banana Republic when it further diversified its product lines, adding a variety of looks suitable for the office and new advertising campaigns were adopted to sell the company’s new relaxed, urban lifestyle image.
Nowadays it remains highly successful with over 600 stores around the world and has a loyal young clientele many of whom are too young even to remember the original concept.
The brand however believes that life is still a journey and plays to the notion of safari only now it’s the urban safari it focuses on. “Today Banana Republic continues to outfit those on the modern journey of life. From harnessing the urban safari to getting a promotion to living out one’s dreams, our customers will be perfectly dressed for every step of the way.”

And the moral is that brand needs to decide what is an enduring theme and what is a fad, so they can adapt accordingly. Is your brand relying on a fad or a long-term theme?
Footnote: The only question remaining is whether given time could the Zieglers have turned it around and indeed speaking a few years ago Mel Zielger said he ran into Fisher at a cocktail party and recalls that the Gap founder was repentant. “He came up to me and said he really regretted what he had done [to Banana Republic].” He went on to wonder what might have been “If we could wind back the clock, the challenge would have been for us to keep it fresh year after year. But they felt that we had taken a metaphor and gotten as much as we were going to get out of it.”

One thought on “A tale of two stores”