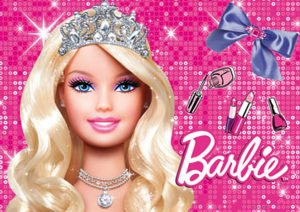 At the beginning of 2015, there were a number of jokes going around about a new Barbie – Retirement Barbie.
Mattel had just announced that sales had fallen by 14 % in 2014, the third year running where sales had dropped by more than 10%. Barbie, who had been unveiled during the New York Toy Fair on March 9, 1959, and who had regularly brought in over $1 billion a year in global sales, now looked like she might be on her last legs.
Indeed it was those anatomically inaccurate legs, waist and neck that many thought were the problem. The International Journal of Eating Disorders had reported that the odds of being born with a Barbie-like body are less than 100,000 to 1. It had been estimated that a Barbie-style waist would accommodate just half a liver and a few inches of intestine. Experts said her neck would crumple under the weight of her disproportionately huge head.
In contrast, a doll with an average woman’s proportions had gained viral success; full-bodied models were being increasingly integrated into high-fashion campaigns; the single “All about that bass,” by Meghan Trainor, which celebrates curvy bodies had become an international mega-hit. Queens of Africa, a range of dolls launched originally in Nigeria and modelled on three of that country’s biggest tribes, was outselling Barbie in its home market and was gaining increased demand from Europe, Brazil and America.

Something had to change and in the end it was Barbie and the senior team at Mattel who did. CEO Bryan Stockton resigned and Mattel brought back Richard Dickson as Chief Brands Officer, President and COO. He had helped lift Barbie out of a previous slump in the 1990s. 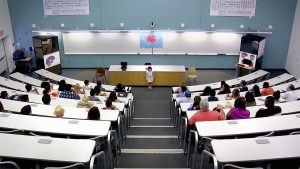 In October 2015 a new communication idea, ‘Imagine the possibilities’ was launched. It was a radical departure from previous campaigns and featured a two-minute spot of young girls doing things their way – Veterinarian, Football Coach and College Professor. Young girls taking on adult roles to the initial surprise of the adults they encounter. It’s a powerful idea, part of the “ongoing brand evolution that is designed to encourage parents to reappraise the role Barbie can play in [a] child’s life,” according to Evelyn Mazzocco, global SVP and general manager of Barbie.
The aim, Mazzocco explains is to “remind today’s parents that through the power of imagination, Barbie allows girls to explore their limitless potential. Founded by a female entrepreneur and mother in 1959, the Barbie brand has always represented the fact that women have choices.” 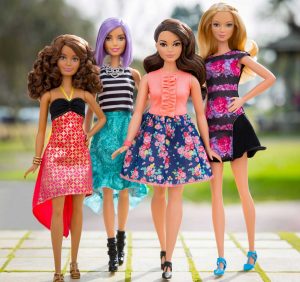 However, changing communication was never likely to be enough and on January 28th 2016 Mattel announced an even bigger change. It released three new body types: Petite, Tall and Curvy. They were available in 7 skin tones, 22 eye colours, 24 hairstyles, and even had a flat foot option.
“Barbie reflects the world girls see around them,” Dickson explains. “Her ability to evolve and grow with the times, while staying true to her spirit, is central to why Barbie is the number one fashion doll in the world.”
Indeed looking back to the brand’s origins, it would appear that Ruth Handler, Barbie’s original creator, really did want girls to have more choices. “My whole philosophy of Barbie was that, through the doll, the girl could be anything she wanted to be. Barbie always represented the fact that a woman has choices. ”

New Barbie is clearly a modern re- expression of that philosophy and, while not everyone is completely convinced, the general feeling seems to be that many more girls can now play with a doll that more closely resembles them, rather than something they’ll never be.
All eyes are no longer on Barbie’s figure but on the new sales figures.

And the moral is as the world changes so brands need to stimulate change while preserving the core.