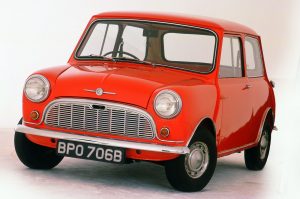 History tells us that a British constitutional crisis can be an inspiration. No, I’m not talking about Brexit but the Suez crisis.

On 29 October 1956, Israel invaded the Egyptian Sinai and began what is known as the Suez Crisis, or the Second Arab-Israeli War. The Israelis were soon joined by the British and the French. The aims for the three allied countries were to regain control of the Suez Canal and to remove Egyptian President Gamal Abdel Nasser, who had recently nationalized the canal.

As the fighting started, an international crisis developed and after a short period, a combination of political pressure and financial threats from the US, the Soviet Union and the United Nations led to a withdrawal by the three invaders.

Another side effect of the crisis had been a reduction in the supply of petrol to the UK, which in turn had led to the Government introducing petrol rationing.

It was this rationing that was the spur, the inspiration that drove the rapid development of the car we know today as the Mini.

Alexander Issigonis was a former racing driver who became a successful engineer and designer. He had worked for Humber, Austin and Morris Motors Ltd when in 1955 he was recruited by British Motor Corporation’s chairman Sir Leonard Lord, to design a new range of three cars. The XC (experimental car) code names assigned for the new cars were XC/9001, for a large comfortable car, XC/9002, for a medium-sized family car, and XC/9003, for a small-town car.

During 1956 Issigonis had concentrated on the larger two cars, going as far as producing several prototypes.

However, at the end of 1956, following the introduction of the fuel rationing that had been brought about by the Suez Crisis, Issigonis was ordered by Lord to focus on and bring the smaller car, XC/9003, to production as quickly as possible.

As early 1957, prototypes were running, and in August 1959 the car was launched as the Morris Mini Minor and the Austin Seven. (It wouldn’t be until 1961 that it would be renamed the Austin Mini, and eight more years before the Mini became a marque in its own right. 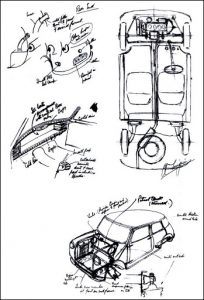 Issigonis and his team were incredibly innovative with their design, introducing a space-saving transverse engine front-wheel drive layout, which allowed 80% of the area of the car’s floorpan to be used for passengers and luggage, so helping give the car its compact size and good fuel efficiency. It was an approach that would influence a generation of car makers.

The car was an immediate and huge success and went onto become an icon of 1960s British popular culture, not least for a starring role in the 1969 film, ‘The Italian Job’.

This same speed, ingenuity and innovative thinking, the repurposing and redirecting of energies are things we are seeing at the moment in how companies respond to help the Government and the people in the midst of tis COVID crisis.

In the longer-term organizations, brands and marketers need to think how they harness these attributes to develop new products and services for a world recovering from a pandemic and facing a recession.

We need ideas that will help give employment to people made redundant or furloughed, to make profits to help repay the national debt and rebuild pension funds, not just line the pockets of the very rich.

It will however be in a big challenge as nobody really knows how the world will change and the innovations will need to take account of the needs of that other crisis – climate change.