VanMoof was started by two Dutch brothers, based in Amsterdam, who wanted to develop the kinds of bikes that got people from A to B, without any fuss. According to their website they are “a team of riders, designers, dreamers and doers united by one goal: to help you get around your city faster, smarter, happier, and in utmost style”.

Take for example their Electrified S bike, which they describe as ‘Smart, Sleek and Superpowered’. Its powerful motor is so quiet that most people wouldn’t know it was an electric bike, unless you told them. It’s one of the lightest electric bikes on the market, weighing just 18.4kg. It also has a number of smart features built in, including its own smartphone app and an anti-theft tracking device designed to make bike theft a thing of the past.
Now imagine after all the sell, the ordering, the expectation, finally your new bike is delivered to your door. You rush to open it …and it’s damaged.
“Anyone in the ecom world knows you’re only as good as your shipping partner,” wrote VanMoof creative director Bex Rad. “Your covetable products, your frictionless website, your killer brand—they all count for nothing when your delivery partner drops the ball.”
For eight years they kept trying new shipping partners but, disappointingly, the results were consistently poor. It was a real (bike) spanner in the works!
“No matter who was doing the shipping, too many of our bikes arrived looking like they’d been through a metal-munching combine harvester,” writes Rad. “It was getting expensive for us, and bloody annoying for our customers.”
Luckily, it was at this point that, rather than giving up and riding off into the sunset, they had a flash of inspiration. They stopped thinking about bikes and starting thinking about other big items that were fragile but were delivered safely to people’s homes. 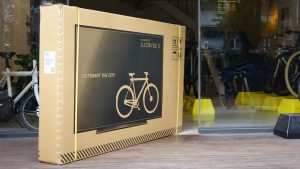 “Our boxes are about the same size as a (really really massive) flatscreen television. Flatscreen televisions always arrive in perfect condition. What if we just printed a flatscreen television on the side of our boxes?”
It was a simple and local cost solution that had a huge and immediate impact; shipping damage dropped by 70%-80%.
And the moral is sometimes it pays to think out of the box (sorry couldn’t resist it!). What can you learn from looking at how other markets deal with the same challenges you face?
Footnote:
The company hoped to keep the hack secret in the hope of continuing to fool the shippers, but it got out when a photograph of the packaging was posted to Twitter by the Wall Street Journal’s Jason Gay.
Luckily being outed on Twitter hasn’t made any difference to the efficacy of this new packaging. In fact if anything it has improved it even more. “Our damage rate has gone even lower since the news came out,” VanMoof marketing director Dave Shoemack told Co.Exist. “It seems that we now get special treatment!”