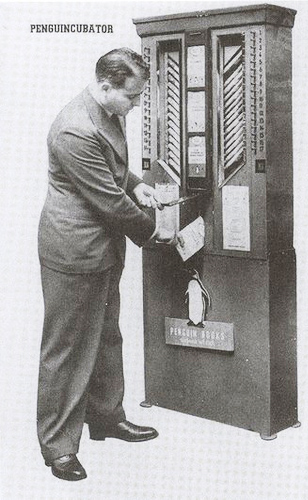 I have previously published my version of the story about how Sir Allan Lane was inspired to launch Penguin books, when returning to London after visiting the author Agatha Christie in Devon. He had found only a very narrow choice of things to read at Exeter railway station and felt there was an opportunity in making inexpensive but high-quality paperbacks available to the mass market

While the story traditionally focuses on this moment of inspiration and the subsequent despatch of the office junior, Edward Young, to London Zoo to sketch the penguin that would become the brand logo, further research uncovers others stories around the birth of the brand.

Two revolve around the inconvenient fact that sales were initially slow and Lane even privately admitted to friends that the venture might fail.

His first solution was the ingenious “Penguincubator” which appears to have been the first-ever (or possibly according to one source the second-ever) vending machine for books. Once built, it was installed outside Henderson’s at 66 Charing Cross Road, London and the books contained in it could be purchased for 6d. (Old English pence for anyone young enough not to get the reference – 2.5p and probably equivalent to c£2.50 now). However it wasn’t an overnight success and it drew complaints from nearby booksellers so didn’t solve Lane’s problem.

The ultimate solution and the second story is a variation on the classic ‘chairman’s wife’ tale.

Still looking for ways to build distribution and drive sales, Lane decided to try his luck with Woolworth’s, which at the time was the largest chain store in the UK. Provided he was patient he knew he would eventually been seen, as the retailer was famous for its open door policy, promising that any personal caller would get a friendly welcome and could meet the relevant buyer if they were prepared to wait.

He duly called at the headquarters at 1-5 New Bond Street in the heart of London’s fashionable Mayfair and within an hour of arrival, at about twelve noon, Lane was greeted by E. Clifford Prescott. Prescott explained that the store classified books as “Fancy Goods”, and that this was one of his ranges

Lane’s luck however seemed to have run out as his sales pitch appeared to be falling on deaf ears. Prescott didn’t seem that interested, shuffled in his seat and looked out of the window. The problem it appeared was that while the books who sell for 6d and so fall within Woolworth’s promise to sell nothing that cost more than sixpence, Prescott felt they weren’t ‘fancy’ enough to compete with the colouring books and job novels printed on low-grade paper with brightly coloured dust jackets the store already stocked.

Then just as he was about to pack up and leave Lane’s luck changed. Prescott’s wife who was on a rare visit to London poked her head around the door. She had finished her shopping and was now ready to be taken to lunch in nearby Regent Street.

It was then that Mrs Prescott spotted the Agatha Christie Poirot Book “The Peculiar Affair at Styles” lying amongst the assorted titles spread around her husband’s meeting table. She enquired whether the firm was considering selling the softcover books, and announced that she would buy several a week if the price were sixpence or less.

Prescott’s ears pricked up and suddenly he was interested. He decided to place an initial order of 36,000, each of the firm’s 600 stores were sent a crate of 500 books, and an additional thousand should be sent to the outlets at the major seaside resorts of Eastbourne, Bournemouth, Southsea, Margate, Blackpool and Skegness.

Sales went well and by the end of the summer season, top-up orders from the branches brought the total sale to 63,000 books.

On the basis of these are other sales which picked up too, Lane was able to establish Penguin as a separate business from Bodley Head.

(…and finally for any regular visitors, apologies for the short break in posting, a combination of too much work and too much play – holiday!)