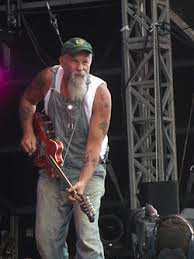 The relationship between workers and their ‘beasts of burden’ has always been close, as the lyrics from Thos S. Allen’s 1905 song “Low Bridge, Everybody Down!” testify…

We’d better look around for a job, old gal,

Fifteen miles on the Erie Canal

You can bet your life I’ll never part with Sal,

Fifteen miles on the Erie Canal

A more modern equivalent but equally loving relationship seems to exist between many farmers and their John Deere tractors. It too has been celebrated in song. This one “Big Green And Yeller” by Seasick Steve who often appears wearing his green and ‘yeller’ John Deere cap

Or somethin’ pretty near

Gonna go out and buy me

Get that ol’ tractor

One reason for the closeness of the farming community and their John Deere tractors can be traced back to 1895 when the brand launched it’s magazine The Furrow. The magazine, considered by many to be the the first and longest running example of ‘content marketing’, is still very much in circulation, reaching about 2 million readers in 40 countries in 12 different languages.

“The precise circumstances under which the idea for The Furrow was hatched are unclear. I can tell you the company was under the direction of John Deere’s son, Charles, when The Furrow was first published. Charles was known as a fairly astute marketer; he recognized farmers’ need for an accurate, unbiased source of information, and recognized the marketing potential associated with providing that information” said David G. Jones, the current Publications Manager.

Right from The Furrow‘s first issue its popularity quickly snowballed; circulation grew to reach more than 4 million consumers at its peak in 1912.

John Deere’s manager of corporate history, Neil Dahlstrom picks up the story.“Looking back at our archives, you can see the changes, from an advertorial, to a general agriculture journal with farming hints and reprinted articles that look a lot like the Farmers’ Almanac, to today’s magazine that tells farmers how to run their businesses,” he said.

“I’ve never worked for a brand magazine like this that people loved so much. Telling stories that folks enjoy reading—and that they can use in their own operations—has been the recipe since the beginning.”

“Even the most technical subject has to have a human story behind it. We’ve always been able to convince the management that the content shouldn’t be about John Deere equipment. We’ve stuck to that over time.”

And it’s a formula that remains successful, today, the magazine reaches about 570,000 consumers in the U.S. and Canada, and about 2 million globally.

“I was trying to familiarise myself with the brand on the editorial side, and I kept feeling a little like Harry Potter, lost in a new world,…[The Furrow] is a portal into a brand that people feel passionately about—to the level that kids are wallpapering their rooms with [our] tractors. … You just don’t run across that every day”