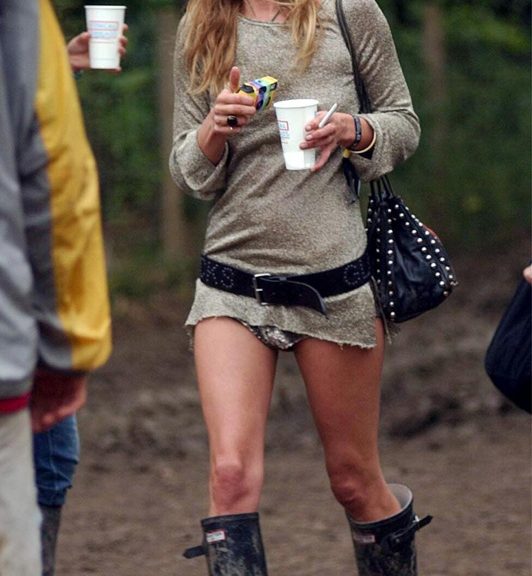 July 2006 and supermodel Kate Moss is photographed at the Glastonbury festival wearing a pair of black, chunky, knee-high rubber boots.

The photograph is seen by millions, many of whom probably thought “That woman could wear anything and still look good”, but Michael Todd who have previously worked with Ugg in Australia thought something completely different. He thought “Opportunity”.

The boots in question were made by 150 year old British brand, Hunter.

Todd decided to call Hunter’s chief executive, Peter Mullen. Todd explained his thinking to Mullen. Moss’ unprompted choice of a pair of traditional old Hunters- it wasn’t a classic brand placement– meant the brand might be well placed to shed its old-fashioned, even stuffy image. Todd’s pitch was that the brand needed to be ‘re-booted’ and to  target a younger, more fashion-conscious target audience.

Mullen listened and six months later he hired Todd, soon making him the company’s chief marketing officer and charging him with reinventing the Hunter brand.

In the past Hunter had targeted its boots at British farmers, horse lovers and members of the “leisured” class who wore them while mucking stalls and tending sheep, but its image was damaged when the company went into bankruptcy in 2005.

Then, in April 2006, it was acquired by a consortium of owners, including Mullen, the founder of Thomas Pink shirtmakers.  The strategy at that had been to cut costs so moved manufacturing from Scotland to China while trying to raise the price of a pair of boots by 20% to $115; they did add new colours and textured versions.

Todd decided that he wanted to play up the bootmaker’s historic appeal but that it should be, as he had suggested to Mullen, targeted at middle and upper class high-flyers the sort of people who went “glamping” (glamourous camping) to festivals like Glastonbury.

In 2007 he persuaded a buyer at John Lewis to carry two styles of Hunter boots at its store in Reading, England, the site of another of the big annual music festivals. It was to prove a turning point; the boots sold quickly and today John Lewis sells 30 Hunter lines nationally.

Todd, through his connections made while at Ugg – another long-established brand that had become trendy amongst the fashion conscious – then secured mentions and features in such magazines as Grazia in the U.K. and Vogue in the U.S. and soon even more “trendsetters” were seen wearing jeans and tights tucked inside their Hunter boots.

Todd worked on developing the brand internationally. In The US they got listings in Bergdorf Goodman, Bloomingdale’s and 400 other outlets, and sales there now account for at least 30% of the brand’s overall sales.

The brand had had royal connections; in 1977 Prince Philip, Duke of Edinburgh, had awarded Hunter boots a Royal Warrant, which designated the company as an official supplier to the Royal Family. The brand had even got its first celebrity exposure in 1981, when Princess Diana–then the shy, unstylish Lady Diana Spencer–wore green Hunter boots in her pre-makeover engagement photos.

With a new generation of aspirational royals, PrInce William, Kate and Prince Harry, who were all part of the glamourous outdoor young country set, Todd decided it was time that the brand started playing up those associations. He made the Royal Warrant logo more prominent on the tags and packaging of Hunter boots. Todd is the first to explicitly recognise the benefit of the Warrant and the fact that the Princes did indeed wear Hunters; “We, as a brand, can capitalize on that.”