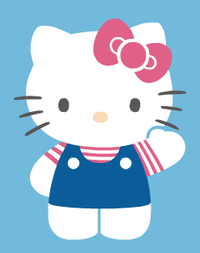 So how many clues do you need before you can guess the brand?

Her surname is White.

She lives in London.

Her birthday is November 1st.

She has a twin sister named Mimmy.

Her favourite food is apple pie.

Her favourite word is friendship

Her favourite subjects in school are English, music and art.

She is five apples tall and weighs three apples.

She is in the third grade but when school’s out she travels the world making new friends.

She is bright, kind-hearted, and loves the outdoors.

She has no mouth.

She first appeared in 1974 and doesn’t seem to have aged a day since then.

She is none other than the worldwide mega brand Hello Kitty.

Kitty’s story actually begins in 1962, when Shintaro Tsuji founds Sanrio and begins selling rubber sandals with flowers painted on them.

Over time Tsuji noticed when a cute design was added to the now ex
panded range of merchandise sales and profits increased, so he started to hire cartoonists to design cute characters for him. His growing stable of characters included a number of characters who were supposed to have originated in the US.

In 1974 Tsuji commissioned Yuko Shimizu to create a new character. The brief was for a “British” character because at the time, in the mid-1970s, foreign countries and in particular Britain, were considered trendy in Japan. Sanrio’s motto is “social communication” and Tsuji’s  other request was that the new brand name should reflect that.

Shimizu came up with a drawing of a white Japanese Bobtail cat that had a red bow in its hair and was wearing blue overalls. She got the name ‘Kitty’ from Lewis Carroll’s Through the Looking-Glass, where Alice’s cat is called Kitty.

To reflect the social communication Shimizu first considered “Hi Kitty” before settling on “Hello” to capture the friendly nature required.

A distinctive feature of Hello Kitty is the lack of a mouth. Spokespeople for Sanrio have given slightly different explanations for the omission over time. At one time they said they wanted  people to “project their feelings onto the character” and “be happy or sad together with Hello Kitty”.

Another explanation Sanrio has given is that they see Hello Kitty as a symbol of friendship; they hope she will encourage friendship between people across the world and so she “speaks from the heart. She’s Sanrio’s ambassador to the world and isn’t bound to any particular language”.

The character’s first appearance on an item was a vinyl coin purse in Japan where she was pictured sitting between a bottle of milk and a goldfish bowl. She first appeared in the United States in 1976.

Originally aimed at pre-teen girls, Hello Kitty’s market has broadened considerably to include adult consumers. She can now be found on a huge variety of products ranging from school supplies to fashion accessories to high-end consumer products.

Several Hello Kitty TV series have been produced and she is the main character at the two Japanese Sanrio theme parks, Harmonyland and the indoor Sanrio Puroland.

In 2014 Hello Kitty was estimated to be delivering $7 billion a year, interestingly all without any advertising.