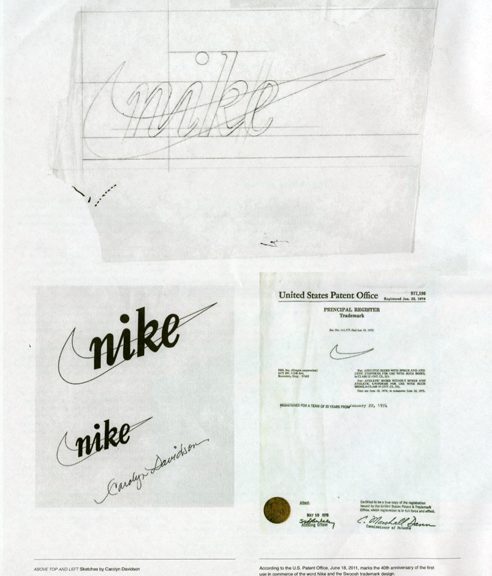 One day in 1971, Carolyn Davidson, a design student at Portland State University, was sitting in a hallway working on a drawing assignment and bemoaning the fact that she couldn’t afford to take an oil painting class. A young associate professor overheard her and asked if she wanted to do some work for him and his fledgling company.  He offered to pay her $2 an hour. She accepted.

Phil Knight was that young associate professor of accounting at PSU. He had taken the job to supplement the modest income he made running Blue Ribbon Sports, Inc. – a small, fledgling company that served as a West Coast distributor of Japanese-made Tiger brand sneakers in the U.S.

Carolyn’s initial work involved making charts and graphs for his BRS meetings with executives visiting from Japan. Phil however had bigger plans and wanted to start selling his own brand of cleated shoes for football or soccer that he was having made in Mexico. He gave Carolyn a new brief. He wanted an identity, a “stripe”, which was the industry term for a shoe logo.

Phil told her it needed to convey motion and that it couldn’t look like the logos of Adidas, Puma or Onitsuka’s Tiger.

For the next fortnight Carolyn worked on numerous ideas, the best of which she would sketch out by hand on tissue paper and lay them over a drawing of a shoe she’d done. In the end she presented 5 or 6 of her designs to Phil and two other Nike executives

Unfortunately they weren’t that impressed and when her initial presentation closed, they asked “What else you got?”

Carolyn said that was all she had to show.

Phil and his team were pressed for time and after discussion it became clear that all three men were at least willing to accept the one of the designs. The “checkmark” they chose just happened to be Carolyn’s favourite too.

Phil summed up his thoughts at the time saying “Well, I don’t love it, but maybe it will grow on me” and because they needed it so quickly, Carolyn didn’t even have any time to refine or clean-up her initial design.

In 1972, the company first began selling shoes with the Nike name, named after the Greek goddess of victory. In June 1972, the first running shoes bearing the Swoosh were introduced at the U.S. Track and Field Olympic Trials in Eugene, Oregon.

Footnote: Carolyn graduated from PSU in 1971 with a bachelor’s in graphic design. She continued to work for Nike designing ads, brochures, posters and catalogues. As the company grew exponentially there came a point late in 1975 when it became clear that her one-person design shop was too small to handle all of Nike’s advertising and design needs. Nike and Carolyn agreed it was time for a full-service ad agency. She opted to split her time home-making and doing some freelance design work.

In 1983, three years after it went public, the executives at Nike surprised her with a party. In additional to presenting her with a gold ring in the shape of her Swoosh, complete with a small diamond, they also gave her a certificate of appreciation and 500 shares of stock.

Of that gift, Davidson says it “was something rather special for Phil to do, because I originally billed him and he paid that invoice.”

She has never sold the shares and they are worth between $½-1 million today.