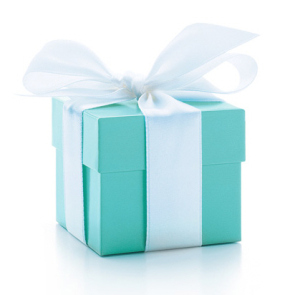 …but it has to be a particular shade of blue.

PMS (Pantone Matching System) number 1837 in fact; a colour that is much better known as “Tiffany Blue”.

Tiffany Blue is a particular shade of light robin egg blue that has been associated with the world famous company almost since it was founded in 1837 (the number now given to it) but not actually really used till 1845.

Founded by Charles Lewis Tiffany and John B. Young in New York City, the brand was originally positioned  as a “stationery and fancy goods emporium”,  and operated as Tiffany, Young and Ellis in Lower Manhattan.

At an auction in 1887, Tiffany purchased a third of the French crown jewels, including Empress Eugenie’s famous diamond necklace and earned himself the nickname “The King of Diamonds”

The first Tiffany’s mail order catalogue was published in 1845 in the United States and its cover was a distinctive robin egg blue. It quickly became known as the “Blue Book” and is still published to this day.

The colour is now protected as a trademark in a number of countries and jurisdictions including the U.S.

It is produced as a private custom colour by Pantone, and as a trademarked colour, it is not publicly available and is not printed in the Pantone Matching System swatch books.

Why was that particular shade chosen?

The most often quoted reason is that it was Empress Eugenie’s favourite shade.

Napoleon III’s wife, was an early global fashion icon and helped set the style and trends of the day around the world.

Turquoise gems were extremely popular in the 19th century. In fact, Victorian brides often gave their bridesmaids dove-shaped brooches in that colour.

Having seen the immediate appeal of the blue on the catalogue, Tiffany had it used on other promotional materials including boxes and bags and it was he who mandated that the coveted boxes could only be acquired with a Tiffany purchase.

The New York Sun wrote of the box’s special appeal in 1906 saying, “Tiffany has one thing in stock that you cannot buy of him for as much money as you may offer, he will only give it to you. And that is one of his boxes.”