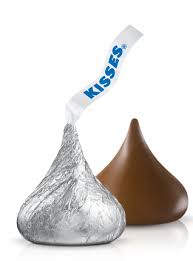 Seeing as it’s Valentine weekend a story, or even three short stories all about brands called Kiss seem somehow appropriate

Sweet, light and a moment on the lips – perhaps it’s no surprise why confectionery and kisses are closely associated.

It seems to be a global association too… as candy kisses appear in many countries. Three of the most famous are also linked, not only by their names, but by the concept of letters or messages.

The oldest of the 3 brands, Kiss Kiss, dates back to 1897 and, although it wasn’t registered until 1901, it is still Finland’s oldest trademark. Kiss Kiss are oval-shaped candies with a light, crispy shell, that are filled with delicious chewy toffee.

Across the Atlantic, in 2007, The United States Postal Service also issued a postage stamp that featured a confectionery brand called Kiss. The 39-cent stamp, part of the USPS’s “Love” series, featured a Hershey’s Kiss.

It coincided with the centenary of the brand itself as Hershey’s Kisses milk chocolates were first introduced in 1907.

Hershey’s Kisses got their name from the machine that makes them, or more specifically from the sound and motion it made. Workers thought the machine appeared to “kiss” the conveyor belt as each sweet was dispensed, and every time it did it made a noise that sounded exactly like a couple kissing – so the name of the product was never in doubt.

Another iconic aspect of the brand, added some years later, is the distinctive paper “plume” that the company uses to communicate a guarantee that consumers are getting the genuine Hershey product, rather than an imitation. This thin paper strip is now a registered company trademark.

However, many people believe that the idea for this plume was borrowed from the third of our kisses; made by Italian confectioner Perugina and called Baci (Italian for “kisses”).

Baci chocolates are the youngest of our triumvirate of kisses as they only arrived on the Italian market in 1922, 15 years after the founding of Perugina. Enveloped in dark chocolate, the product contains a chopped hazelnut filling and whole hazelnut centre added when creator Luisa Spagnoli needed to use hazelnuts left over from other factory recipes.

The little chocolates were reputed to have been used as a clandestine method for delivering love notes between Luisa Spagnoli and her fellow confectioner, Giovanni Buitoni. Little paper scrolls containing “love notes” were soon included inside all of the chocolates’ silver wrappings.

Some believe it is this lovely story that may have served as the inspiration for the paper strip used in America on Heshey’s Kisses.

So whether it’s chocolate, hazelnut or toffee, a letter, a stamp or even just a plume, it appears that the whole world can’t resist a candy kiss.

Footnote: According to some scientists, chocolate may be more passionate than a kiss. Couples in their 20s had their heart rates and brains monitored while they first melted chocolate in their mouths and then kissed. Chocolate caused a more intense and longer lasting “buzz” than kissing, and doubled volunteers’ heart rates according to the research carried out by Dr David Lewis, formerly of the University of Sussex, and now of the Mind Lab.